SF: 9 Fittest Towns of the West 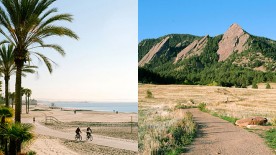 It’s easy to be fit out West, with big mountains, bike-friendly towns, and beaches that practically beg for a volleyball net.

Catch some air at the House of Air trampoline park where the pros say you can bounce away at least 700 calories an hour, and we believe it. Or rent a decked-out bike at Sports Basement and the Presidio (pictured) is yours to explore. On Sunday mornings, staffers lead free rides over the Golden Gate Bridge into Marin.

Where the athletes eat: Fresh and seasonal culture runs so deep, it spills into neighborhood markets like Bi-Rite (415/241-9760; biritemarket.com) in the Mission, where the guy working the deli counter is apt to hold a degree from the Cordon Bleu. Visit the Ferry Plaza Farmers Market (www.ferrybuildingmarketplace.com) where every chef worth his volcanic rock salt shops.

With beaches, ample green space, and near-perfect weather year-round, it’s no wonder the San Diego area—specifically, Chula Vista—is home to one of only three U.S. Olympic training centers. Grab a kayak at La Jolla Shores (rental places abound) and explore the sea caves of La Jolla Cove. Or take a walk or run along Pacific Beach. Save time for a stroll around the San Diego Zoo, too.

Where the athletes eat: Fuel up with a hearty, no-fuss breakfast at Kono’s Surf Club Café ($; 858/483-1669), next to Crystal Pier in Pacific Beach, where you can eat right by the water. And be sure to hit one of the many farmers’ markets around town.

One of Long Beach’s advantages is its proximity to L.A. and Orange Counties. What’s more, you have the beach and the mountains, which opens up a world of active possibilities. Rent a paddleboard or kayak. Aloha SUP Rentals (alohasuprentals.com) in Long Beach is a good place to start—or just go bodysurfing. If you’re more land-focused, grab a bike or some in-line skates and cruise along the shoreline path, which runs from downtown Long Beach to Belmont Shore.

Where the athletes eat: Schooner or Later ($; 562/430-3495), right on the water in Long Beach, serves all-American fare for breakfast and lunch. You also can’t go wrong at any of the cliffside restaurants along the Newport Coast, where you can watch the sunset, go tidepooling, and maybe spot a dolphin.

The sun and altitude provide a mix that makes the town an endurance athlete’s paradise, particularly cyclists and hikers. Start at Amante Coffee (amantecoffee.com) on North Broadway, where the cyclists hang out, then ride 14 miles up through Lefthand Canyon to Jamestown, an old mining outpost. You can also take joyrides in the Valmont Bike Park (valmontbikepark.org), and cross-country ski around North Boulder Park. Great hikes and walks around town: Chautauqua Park, Mount Sanitas, or the Boulder Creek Path.

Take one look at the 22.5-mile Boise River Greenbelt trail, watching locals float rafts downstream or cast flies in the shallows, and you’ll wonder why you haven’t heard more about this small-town city, which seems to have more green space than people. Boise might just win the award for most within-city recreation. And just out of town is pretty great too. We love Bogus Basin (bogusbasin.org) for nordic skiing in winter and biking during the rest of the year. Walk or pedal the Greenbelt trail in town, or hike up Table Rock, just 1.5 miles from downtown. Poke around the historic Hyde Park neighborhood, ending up at the trailheads in Camel’s Back Park.

What’s not to love about a high-desert town with about 300 days a year of sunshine and trails that start conveniently in the center? Rent a mountain bike from Sunnyside Sports (sunnysidesports.com) and head to Phil’s Trail, on the west edge of town, where the network of paths runs the gamut of difficulty and passes through ponderosa pine forests. Or hike or run through downtown and Drake Park on the Deschutes River Trail. Smith Rock State Park, north of town, has sheer basalt walls and welded tuff cliffs that make it a magnet for rock climbers.

Where the athletes eat: Get your morning brew at Backporch Coffee Roasters (541/617-3984). Jackson’s Corner ($; 541/647-2198) has wood-fired pizzas, sandwiches, and, on Thursday nights, killer burgers with seasonal ingredients like local morel mushrooms.

One of Arizona’s highest towns is a magnet not just for Phoenix residents escaping summer heat, but also for elite swimmers and runners intent on altitude training. Lush pine-forested trails add to the appeal. For recovery runs, hit the flat, 50-plus-mile Urban Trails System encircling town (flagstaff.az.gov). And for R&R, head south to the red rock scenery and hiking trails of Sedona’s Oak Creek Canyon. Drive up Snowbowl Road for access to prime hiking in the San Francisco Peaks and views of the entire city, or drive or bike Hart Prairie Road through aspen groves and grassland prairies. Schultz Pass Trail is the money spot for mountain biking. fs.usda.gov/coconino

Where the athletes eat: Stop in at Macy’s European Coffeehouse ($; 928/774-2243) to hang out with the pro runners getting a post-workout fix. Another great choice is Pizzicletta ($$; 928/774-3242), founded by a local whose bike travels around Italy inspired him to make pizza and gelato here.

Take a stroll on one of the densely wooded paths in south Seattle’s 300-acre Seward Park, featuring views of the city skyline and Mt. Rainier, bike paths, and sandy beaches. Or bring your bike and follow the 14.2-mile Burke-Gilman Trail from Ballard, east through fun, funky Fremont, north along the shores of Lake Washington (see views of downtown), ending in Kenmore.

Where the atheletes eat: Locals loyal to La Medusa ($$$, 206/723-2192) show up religiously, eager to eat from a Sicilian-inspired seasonal menu where 90% of the produce comes from the local farmers’ market. Past meals have included sautéed second-growth morels and Walla Walla onions, and zabaglione with fresh raspberries and figs.

Hike in a red rock garden at Garden of the Gods. It’s not the altitude blowing your mind, it’s the scenery: wild red rock formations against the backdrop of snow-capped peaks. Or hang with gold medalists at the U.S. Olympic Complex, where you might catch a glimpse of the athletes in training. Free; no tours on Sunday; teamusa.org