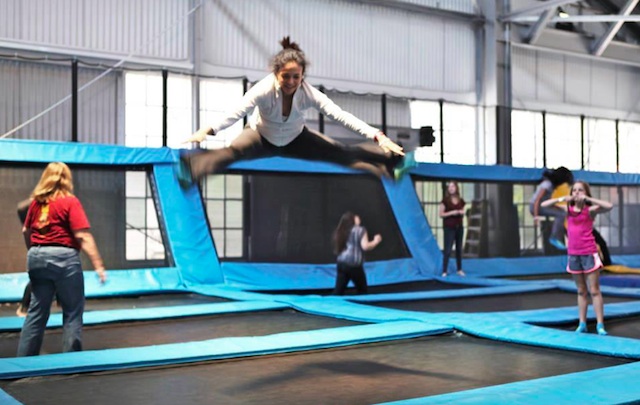 Facebook’s stock may be dropping — as of Friday afternoon, it was at $27.52, down nearly $10 from its opening price — but Sheryl Sandberg is feeling light as a feather.
Sandberg, the social network’s COO, updated her Facebook Timeline cover photo Friday with this picture of her doing an impressive split jump at the House of Air in San Francisco. Part of Sandberg’s job is to be a cheerleader for Facebook — with jumps like this, it seems, she could take that role literally.

Sandberg wrote a caption for the photo with Memorial Day’s date (Monday). We knew Sandberg makes a point of clocking off at 5:30pm every day; now we know a little about how she likes to spend her holidays, too.

The warehouse building, on Crissy Field near San Francisco’s Presidio, is basically a giant trampoline playground for adults. With 8,000 square feet of trampoline space, a DJ booth and flat screen TVs this place is a sweet spot for company parties. (Mashable held its 2011 Social Media Day celebration here.)

Is this refreshingly candid behavior from a top tech exec? Would you like to see Mark Zuckerberg on a trampoline? Let us know in the comments.