Grown-up Dodgeball at House of Air 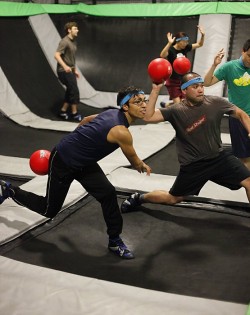 Mat Mullen, 25, was flying in the air, hurtling rubber balls at his opponents and crashing against mesh walls – before heading out to the bar with some new friends.

Trampoline Dodgeball, held at the House of Air trampoline park in the Presidio, may be the best “pre-game” scene in San Francisco. Players form teams of 10 who spend most of the evening hurtling off the floor and the walls in a giant room that is essentially a continuous trampoline.

“It’s nice to ditch the gym and sweat with friends, you know, like we did when we were kids,” says Mullen, who named his team Friends of Precious. “And there’s nothing like showing up to Perry’s (a Union Street bar) sweating.”

Is it dangerous to use dodgeball as a dating pool? “Well …,” says Mullen.

Mullen found out about dodgeball when he and his buddies stumbled on a child’s birthday party in Las Vegas. Before long, Mullen and his Marina roommates were meeting at House of Air for the Tuesday night games.

“We’re all working at social network companies,” says Mullen, “so it’s good to put it into practice.”

Attendees include Facebook, Google, Apple and LinkedIn employees, many in their first years at desk jobs – and happy to combine the San Francisco young set’s favorite activities: working out and dating (though not necessarily in that order).

Bay MacLaughlin, a 27-year-old business manager for Apple, laughs: “It’s distracting how attractive the women are.”

“It gave me a whole different group of friends,” he said. “We all just did a hike through Big Sur last weekend.”

Within minutes of entering the arena, the first teams are drenched in sweat. Mascara is smeared and hair ruffled as the players rocket the hard red plastic balls at each other.

The dodgeball nights are not for the faint of heart or the unathletic. The Presidio facility has more than 65 conjoined trampolines blanketing the floor and walls, able to send a jumper up to 15 feet.

As a game ends, they come laughing and groaning out of the arena, nursing tomorrow’s bruises. Still, furtive glances are exchanged as they head out in packs for cold drinks.