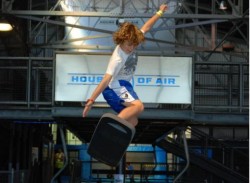 Been to Disney this summer? Check. A water park? Check. A trampoline park?

The nation’s ever-expanding amusement world is taking a new twist this summer as indoor trampoline parks approach critical mass. About 50 are operating in a dozen states, and revenue is approaching $100 million. The parks — which charge $8 to $14 an hour — feature wall-to-wall trampolines, with trampolines even lining side walls.

“It wasn’t on our radar, but I have a feeling it will be soon,” says David Mandt, spokesman for the International Association of Amusement Parks and Attractions.

It’s certainly on the radar of orthopedic surgeons. Broken ankles, arms, legs and even a non-fatal broken neck have been logged at these parks. The American Academy of Orthopaedic Surgeons advises folks to jump with extra caution. “We do not recommend recreational use of trampolines, as sad as that may be,” says Jennifer Weiss, an orthopedic surgeon at Children’s Hospital Los Angeles.

Even so, celebs and their families have tried out some of these parks, including the Jonas Brothers, Kobe Bryant, David Beckham and Shaquille O’Neal.