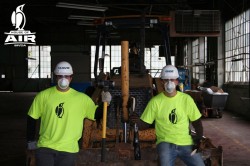 Folks in San Francisco are about to be extra jumpy.

That’s because plans for a wall-to-wall trampoline park called “House of Air” are underway in the Presidio region.

The park is set to open this August and will feature huge trampolines all pushed together. The walls will be made of trampolines as well to ensure maximum bouncing and minimal injury, since falling would only mean landing on more springy surfaces.

Co-creator Dave Schaeffer says the trampoline wonderland has been like “building our own Disneyland” and adds, “Obviously kids are gonna love it, but if you were ever a kid you’re gonna love it too.”

House of Air has been seven years in the making, so seeing it all come together is “more than exciting” for Schaeffer.

He thinks it could also serve as a good training ground for gymnasts, athletes, and Olympians like Shaun White, who can practice his famous double aerials at the park.