What’s the best thing to do with an old airplane hangar? Why, turn it into a giant trampoline park, of course. Building 926 in San Francisco’s Presidio area is being turned into every kid (and adult’s dream): an indoor trampoline park that features trampoline dodgeball, open trampoline jump time, aerial trampoline training, and even trampoline walls. 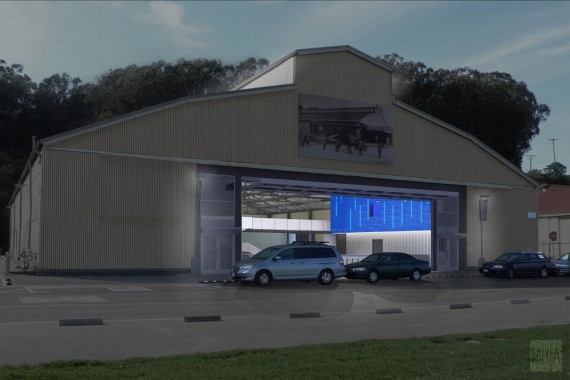 The Presidio Trust explains the genesis of the idea:

The idea for House of Air was developed seven years ago by Dave Schaeffer and Paul McGeehan during one of many long drives back from snowboarding in Lake Tahoe. Its mission of “giving flight to the flightless,” embodied in its mascot, a penguin wearing a jetpack, is a fitting reuse for building 926, which once helped launch De Havilland DH-48 biplanes as part of the Army’s 91st Observation Squadron. Built in 1921, the building originally served as Crissy Air Field’s land-plane hangar. Later it was used as a motor vehicle paint shop and office and storage space for the Army and is a contributing feature to the Presidio’s National Historic Landmark status. The Trust is overseeing the historic rehabilitation of the building which includes seismic upgrades, accessibility improvements, new building systems and other improvements.

The House of Air will be open by August. We’re guessing nobody will miss the airplane hangar in its former incarnation as a storage space.